Anita here. Welcome to my online home! I’m a longtime journalist who's known for my work in journalism innovation, as well as a media consultant, educator and entrepreneur based in Toronto, Canada.

I have over two decades of experience as a multi-platform journalist in three major markets: Toronto, New York City and Ottawa. I started out my career as a reporter and editor at Canadian legacy outlets, including The Toronto Star, The Globe and Mail and CBC. After that, I served in management-level roles at American digital media outlets, such as Fusion, Complex and Mashable. Currently, I am the founder, CEO and editor-in-chief of The Green Line, a hyperlocal, independent news outlet that investigates the way we live to help young and other underserved Torontonians survive in a rapidly changing city.

I also occasionally freelance, with my op-eds and articles appearing in New York Magazine, Poynter, Policy Options and other publications across North America.

Over the course of my career, I’ve edited coverage and reported on a wide range of topics, from courts, crime and politics to entertainment, technology and science. Highlights include: elections at various levels in the U.S. and Canada, the Ukrainian crisis, the Academy Awards, the Superbowl, the Mars Curiosity rover landing, and social movement protests such as Black Lives Matter, Occupy, #MeToo and the climate crisis, among many others stories. I’ve also had the privilege of interviewing cultural and political leaders, such as Mike Myers, Michaëlle Jean, Miranda July, Michael Ignatieff, Jim Flaherty and Guillermo del Toro.

When it comes to my strategic experience, I was an early adopter and proponent of audience engagement and analytics in journalism. Since 2012, when I joined Mashable, I’ve developed successful strategies to ensure my teams effectively interpret social and search analytics so they can better understand our target audiences. I leveraged Google, Facebook, Twitter, Instagram and other platforms to engage and grow followers, monitor trending topics and better connect with different internet subcultures. Beyond these basics, at The Discourse, I created and refined the publication’s online and in-person engagement efforts to attract and retain paying supporters. Colleagues and industry leaders also regularly consult me for my thought leadership on serving underserved groups through community-driven journalism.

As an instructor, I teach journalism innovation at Toronto Metropolitan University (formerly Ryerson University) and community-driven journalism at Centennial College in Toronto. I also provide training on audience engagement and business models to media executives and news entrepreneurs at the City University of New York's Craig Newmark Graduate School of journalism.

In addition to teaching and guest-lecturing at schools across North America, I consult clients such as the American Press Institute, CBC Manitoba, Institute for Nonprofit News, Pink Triangle Press, Journalists for Human Rights, Toronto Public Library, Carleton University, Indiegraf, Liisbeth, Informed Opinions and Google's Project Oasis via Local Independent Online News (LION) Publishers, among many others. I also coached legacy and startup media outlets as part of the Meta Journalism Project’s Sustainability Accelerator. Finally, as mentioned, I'm a media entrepreneur myself, having recently launched The Green Line, a local Toronto-based news outlet, and The Other Wave, a Canada-focused journalism innovation newsletter.

Outside of work, I co-founded Canadian Journalists of Colour, a rapidly growing support and resource-sharing network that's best known for co-releasing seven calls to action to diversify Canadian media with the Canadian Association of Black Journalists in January 2020. Since CJOC’s founding in 2018, we’ve attracted 1,300 members and established chapters in cities and at postsecondary schools across the country. In my role as co-founder, I oversaw CJOC.net, our Facebook group and Slack channel. I also organized ongoing meetups, events and workshops for our members, as well as led collaborations with other Canadian journalism groups and media outlets. I stepped down from CJOC's executive committee in 2021, though I remain an active member of the organization.

As for other professional journalism organizations, I’m a member of the board of directors for the Online News Association and LION, as well as a member of the Canadian Association of Journalists’ Ethics Advisory Committee. I’ve also served on the judging panel for several journalism award competitions, including the Online Journalism Awards, the Digital Publishing Awards and the Canadian Journalism Foundation Awards.

Given my unique background, industry leaders recognize me as an expert in journalism entrepreneurship, audience engagement, media business models, community-driven journalism, editorial and technological innovation, journalism ethics, and diversity, equity and inclusion in media. I’ve spoken in press interviews and at journalism conferences worldwide, including the International Journalism Festival, ONA Insights, CBC’s The Current and TVO’s The Agenda.

But don’t take my word for it — here are some nice things people have said about me. Jeffrey Dvorkin, senior fellow at Massey College and former National Public Radio ombudsman, endorsed me as “one to watch” in journalism. Kathy English, chair of the Canadian Journalism Foundation and The Toronto Star’s former public editor, said, "I strongly recommend Anita Li for a newsroom leadership role in this time when newsrooms require smart, multi-platform digital journalists who understand the importance of diverse newsrooms and innovative thinking about journalism and communities.” Anita Zielina, CUNY’s director of strategic initiatives and a former European media executive, called me “one of the smartest and most thoughtful minds in the journalism innovation space.”

You made it all the way to the end of my bio — kudos! Thanks for taking the time, and don’t hesitate to connect. 🌊

Digital news was supposed to save the struggling newspaper industry. But companies like BuzzFeed and Vice, who were considered industry leaders,

Digital news was supposed to save the struggling newspaper industry. But companies like BuzzFeed and Vice, who were considered industry leaders, are now laying off thousands of staff. Will Canada's media bailout help or hinder the Canadian news landscape? To help assess that and other challenges facing the future of digital journalism, The Agenda invited the following experts for a panel discussion: Canadaland’s Jesse Brown, Postmedia CEO Andrew MacLeod, Anita Li of The Discourse along with professor Colette Brin, a visiting scholar at the Ryerson School of Journalism. 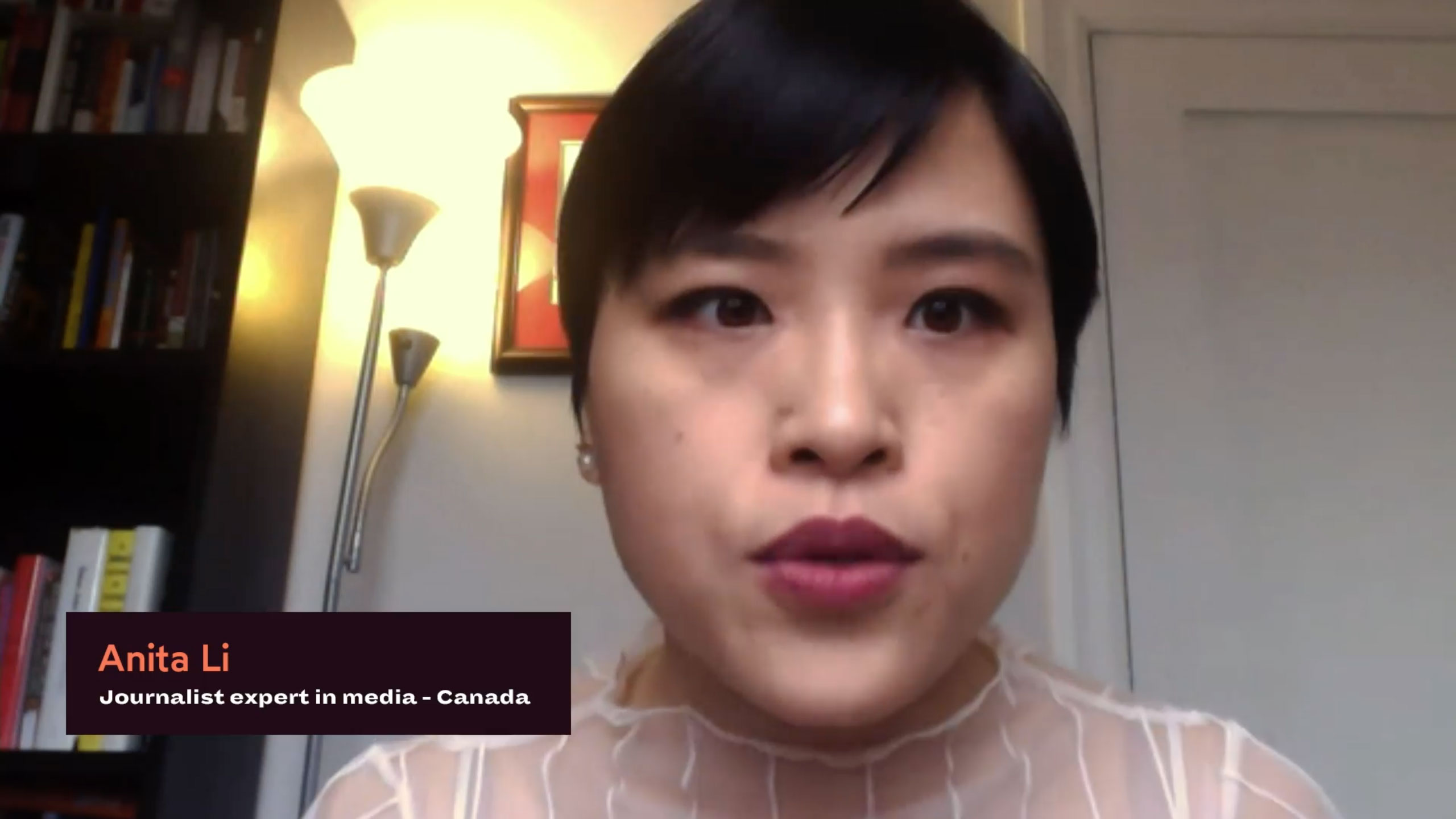 Directed by Paris-based journalist and writer Bruno Masi, the documentary is a compelling look at the evolution of the role of media in society.

Directed by Paris-based journalist and writer Bruno Masi, the documentary is a compelling look at the evolution of the role of media in society. It also features interviews with journalism experts from around the world, including Anita Li, Alice Antheaume, Renate Schroeder, Alan Rusbridger, Jeff Jarvis, Victor Pickard and more. 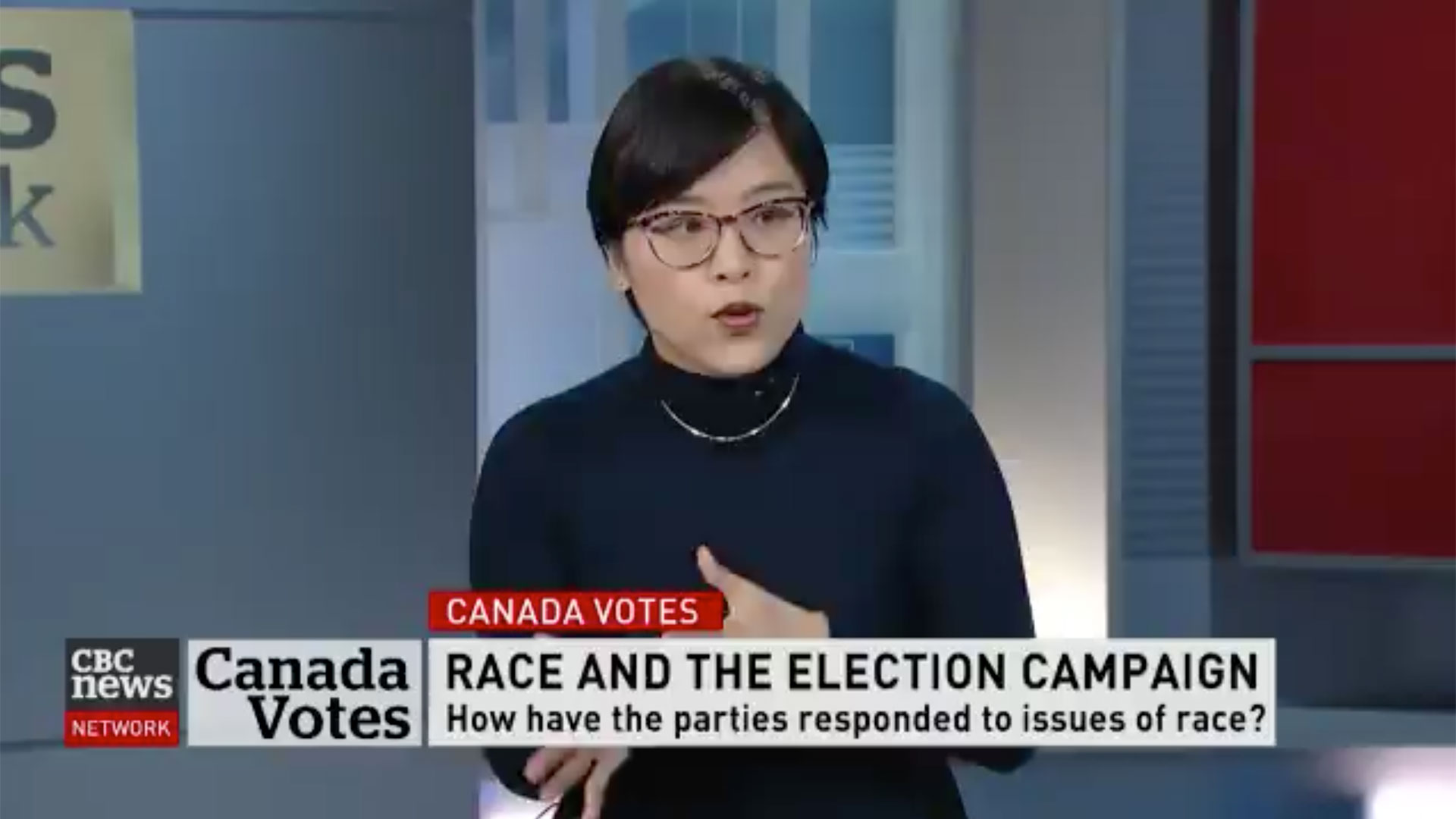 Race and the Election Campaign

What role has race played in this year's election campaign? Have race issues, and the way they've been handled, swayed your vote?

Objectivity in Canadian media, in the wake of Black Lives Matter

The recent BLM movement has intensified the debate in Canada and elsewhere around how the media can better reflect the diversity of the communities it purports to serve. This question necessarily asks not just how news coverage is shaped, but also considers who is doing the shaping. Intertwined with this is an even more challenging but unavoidable question that takes aim at a core tenet of journalism: objectivity. Are journalists being partisan if they say Black Lives Matter? Is it preferable or not for newsrooms to send an Indigenous journalist to cover a protest for Indigenous rights? Can reporters legitimately refuse to cover people who have unsavory views? Under what circumstances can journalists shed the need to adhere to “both sides-ism?” Is it possible to be both activist and professional, or are those roles incompatible? Featuring panellists Anita Li, Rachel Giese, Adrian Harewood, Jeffrey Dvorkin and Duncan McCue.

The Power of Digital Journalism

Anita Li navigates the evolving landscape of digital journalism by brainstorming creative ways to cover news online. Anita's TEDx talk has been taught in universities around the world, reshared by reputable industry publications like Editor & Publisher, and written about in dozens of blogs and social media posts. It was given at a TEDx event using the TED conference format but independently organized by a local community.

Canada Is Working Exactly As Intended

A front-page story tells us that Canada is broken. Is it, or is this exactly how the country was designed to work? And, as a senior editor leaves the CBC, our national broadcaster pivots to audience. Anita Li co-hosts this episode of Canadaland's "Short Cuts."

Is the Canadian media systemically racist?

How the murder of George Floyd affected Black journalists here in Canada. Featuring an interview with Anita Li, co-founder of Canadian Journalists of Colour.

This Canada Day, the country must reflect on its history to write its future

A guide to building deeper relationships with the communities you cover

How We Talk about Race